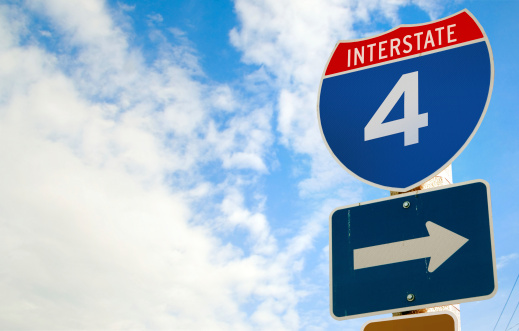 Express lanes were recently added to part of Florida’s Interstate 4, according to numerous news reports, including Fox 35 Orlando. The I-4 Express Lanes will hopefully alleviate rush-hour traffic on the heavily traveled highway.

Where are the I-4 Express Lanes in Florida?

The Florida Department of Transportation (FDOT) recently added Express Lanes to a 21-mile-long stretch of I-4, according to The Orlando Sentinel. The project took seven years and cost the state about $2.5 billion.

I-4 Express Lanes near Orlando run from just west of Kirkman Road in Orange County to just east of SR-434 in Seminole County. The Express Lanes include 16 access points and require drivers to pay a toll using an electronic transponder. Cash payments and toll-by-plate options are not available on the I-4 Express Lanes, according to Fox 35 Orlando.

Relieving traffic congestion on I-4 near Orlando is the main reason why the FDOT created the Express Lanes. However, the new traffic lanes will also hopefully help reduce the number of serious car accidents on I-4 in Florida, which has been named one of the "most dangerous roads in the country."

In particular, the 25-mile-long stretch of I-4 in Volusia County, Florida, was ranked the 33rd most dangerous highway in the country in a nationwide study conducted by ValuePenguin. Overall, I-4 runs 132 miles in Florida, passing through some of the state’s largest cities, including Tampa and Orlando.

Like many other highways, car accidents happen on I-4 in Florida for many different reasons. Some of the most common causes include:

Car accidents caused by drivers who lose control of the vehicle are common on I-4 as well. Just recently, one driver was killed on I-4 in Orange County after losing control of their vehicle, according to WESH 2 News.

In addition, Florida Highway Patrol state troopers recently warned drivers to not unnecessarily put other motorists at risk on the new I-4 Express Lanes. "You should not make a U-turn or ever stop on Express Lanes if you make a mistake. It’s important to just keep going, follow the signage and get off when it’s safe,” a Florida State Trooper said in a recent interview with Fox 35 Orlando.

Highway car accidents caused by other drivers in Florida can be complicated legal matters. Don’t simply assume you will be fairly compensated just because the cause of your crash seems straightforward. It's common for auto insurance companies to purposefully delay, dispute, or flat-out deny injury claims. And if you're not careful, you could lose out on the compensation you're entitled to.

Make sure you fully understand your legal rights and options before you talk to the insurance company. Due to higher speeds, highway accidents often result in more serious injuries, and the cost of treating those injuries represents a threat to the insurance company's bottom line. With the Law Offices of Brent C. Miller, P.A. on your side, you can rest assured that we will fight for every dollar you deserve.

Contact our law firm and schedule a free case evaluation with a Tavares car accident attorney you can trust. We have four offices conveniently located in Central Florida, including Tavares, Inverness, Clermont, and The Villages.